This essay is to clarify key meanings of the existential truth. Although philosophical ap- proaches are based on correspondence theory of truth, nowadays we talk about “post-truth”, “post-facticity”. In Ukrainian (and some other Slavic languages) the word “pravda” that historically meant both “truth” and “justice” expresses a person’s or community’s rightness concerning a state of affairs. “Truth” is mostly used to stress undoubted objectivity of a judg- ment but “pravda” relates to a truth that is being community-to-community different. It gives a phenomenological approach for its exploration, motivated by L. Zuidervaart’s study. A proposition’s meaning is perceived as ‘true’ or ‘untrue’, correct or non-correct depending on life contexts of communication. We consider it as an issue of the existential truth.

The specific role of post-truth in hybrid warfare discloses itself in practice of fighting against propaganda. It uses ‘true’ understanding of own community being to create imagined factual reality of other community’s life-world that is aimed at justification of possible fight- ing. Fakes are not the mere products of a blatant lie, but are derivatives of imagined Other of enemy culture. That account assists clarify interconnection between social and personal di- mensions of existential truth by referring to Heidegger’s concepts of truth as disclosure and authenticity. Doubtless experiencing of authenticity, which ‘we own’ as presupposition of possible resisting to or even fighting against Other’s identity, raises a complicate issue of reaching truth in intercultural dialogue. Addressing to H. Jonas’ concept of human respon- sibility turns an issue of the existential truth into a communicative task of getting universal consensus.

The latter is often considered as a required result of power of human rationality based on propositional truth. A ground for the consensus might be only bringing the truth into everyday life globally either by people who gain experience in current technological indust- ry or by those consuming high-tech tools. Ch. Taylor’s criticism towards F. Fukuyama’s idea of liberating role of global involvement of people into industrial work does not con- firm the first. The second allows to compare current perception of consumed goods with Heidegger’s concept of readiness-to-hand (das Zuhandene). Both referred assist to high- light the increased role of identity versus belief in all-powerful rationality for making “truth” statements. At the conclusion the essay outlines perspectives of understanding in- ner interconnection between freedom and truh.

doctor of sciences in philosophy, professor, Department of Philosophy of Culture, Ethics and Aesthetics, H.S. Skovoroda Institute of Philosophy, National Academy of Sciences of Ukraine.

Bystrytsky, Ye. (1996a). National Idea and Civil Society in the Ukrainian State Building. In: Models of Statehood and the State System of Ukraine at the Turn of the 21st Century: Materials of the Scientific and Practical Seminar. (In Ukrainian) Retrieved from: http://bystrytsky. org/ideasus96.htm. [= Бистрицький 1996a]

Bystrytsky, Ye. (1996b). Ukrainian Idea, Civil Society, Political Nation. In: Ways of Formation of the Ukrainian Political Nation: Materials of the Scientific and Practical Seminar. (In Uk- rainian) Retrieved from: http://bystrytsky.org/idea96.htm. [= Бистрицький 1996b]

Bystrytsky, Ye. (2007). Propedeutics of the concept of freedom. In: Problems of the Essence of Freedom: Methodological and Social Dimensions: Materials of the scientific and theoretical conference, October 26, 2007. (In Ukrainian) Retrieved from: http://bystrytsky.org/svo- boda07.htm. [= Бистрицький 2007]

Tolokolnikova, K. (s.a.). There are six major narratives directed against Ukraine at the Russian TV — the study of UCMC. (In Ukrainian) Retrieved from: http://ms.detector.media/mediapros- vita/research/na_rosiyskomu_tb_isnue_shist_osnovnikh_narativiv_spryamovanikh_pro- ti_ukraini_doslidzhennya_ukmts/. [= Толокольнікова (s.a.)]

Fukuyama, F. (2004). The End of the History and the Last Human. (In Russian) Retrieved from: http://www.lib.ru/POLITOLOG/FUKUYAMA/konec_istorii.txt_with-big-pictures. html]. [= Фукуяма 2004] 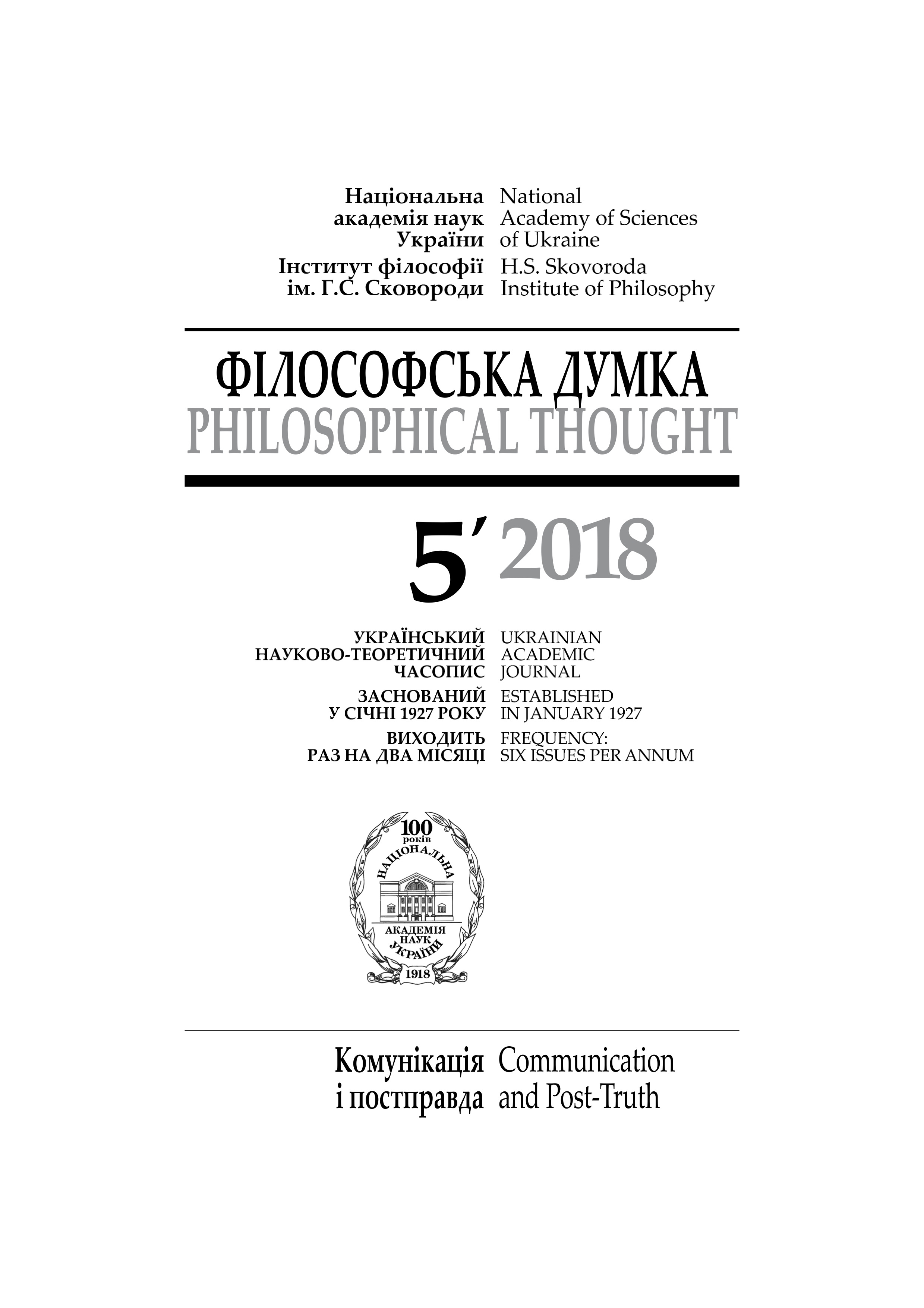